skip to main | skip to sidebar

I found as a parent it was difficult not getting angry when my kids displayed inappropriate behavior. Coloring on the walls, cutting the neighbor kids hair, picking their nose while on the front row during a school assembly, taking a nap on the class room floor during school...the list goes on and on. I have learned as a parent that behavior is key to parenting. I found the behavior of your child is an exhibition of a need that requires fulfillment. My first reaction and the most common reaction from most parents was to punish my child to try and make them stop the behavior. No matter how often I had them take a time out, sit in the corner or ground them, the behavior continued, often escalating to a higher level. When you punish a child for bad behavior, you are punishing them for having needs. That doesn't make sense. So I started trying to figure out what the need was, meet that need and voila, the behavior disappeared. For example, when I bought an artist's pad for my son, the coloring on the walls never again occurred. It is amazing how much easier it is to focus on understanding behavior rather then spend my time coming up with new forms of discipline!

I have a lot more examples of bad behaviors and solutions in the Behavior Chapter (Chapter 5 pg.76) in my book ParentFix. Go to www.parentfix.com for more information
Posted by Maggie Stevens at 10:43 AM 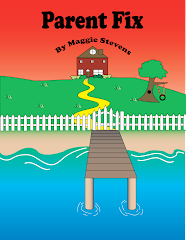